The blogosphere’s alive and kicking

With the advent of Facebook and social networking focus has been removed from genuine blogging, which only a few years ago was the epitome of Internet development. Although social networking has captured huge shares of the time spend online, blogging is in no way dead, however. I know because I’ve digged the number in my latest report “Blogging in the face of social media. The maturing of a media group”. Find reference below.

The findings have led me to revise my previous analysis. Actually I thought blogging was about to fade away. Not so. The number of active Danish blogs keeps growing and reached some 70,000 by the end of 2009 according to overskrift.dk (blogpost in Danish here). Also the number of Danes actually reading blogs grew. Today one out of four Danes online – around 1 million – reads blogs on a regular basis, according to gemiusAudience.

My figures are all on hosted blogs. I found wordpress.com and – especially – blogspot.com to have taken over from local Danish blog-services, accounting for far the largest number of monthly blog-posts, and having more than doubled their combined audience since January 2008, from 472,000 monthly readers to nearly 900,000 in December 2009. The blogging services of established Danish media however has not been able to keep up the pace.

Contrary to the findings of Pew Internet, blogging in Denmark is – increasingly – powered by young adults, who are especially attracted to the format, with affinity indexes of the 15-19 years old Danes of up to 243 for one of the leading blog-services, decreasing below 100 for the 50-59 years olds. And, as the figure shows, affinity of the 15-19 years old has increased significantly over the past two years. 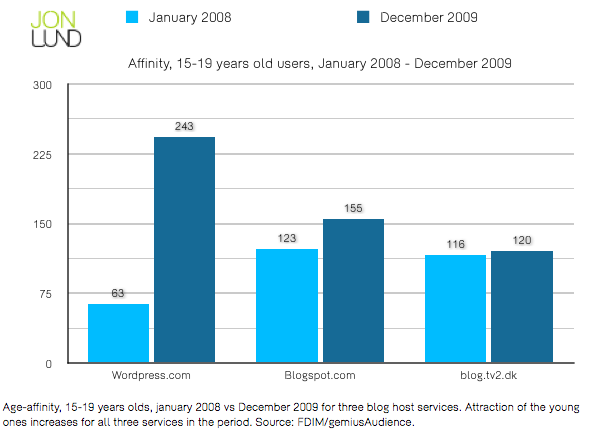 What seems to be at stake here is nothing less than the results of the social media revolution. From being a hyped, avantgarde thing, blogging has now got a hold of a much wider segments of the Danish population, who blogs – and reads blogs – as a natural part of their self-expression and seeking of information. Blogging is not so much a question of cathing 15 minutes of fame, but a means to create yourself through stating your own views, experiences and beliefs.

Paradoxically Facebook might have helped giving birth to this new state of media-understanding and -usage. On the one hand the status-updates universe of Facebook has caused an extremely wide audience to be acquainted with publicly sharing personal details – while on the other hand the limits of status-updates has become evermore clear, leading those with more to say to create their own blogs. That’s at least my (new) hypothesis.

“Blogging in the face of social media. The maturing of a media group”. 16 pages, 5 illustrations.

To order the report, send an email to jon@jon-lund.com including your contact information with subject: “Buy Jon Lunds Blogging”, and you’ll receive both the report as pdf-file and an invoice.