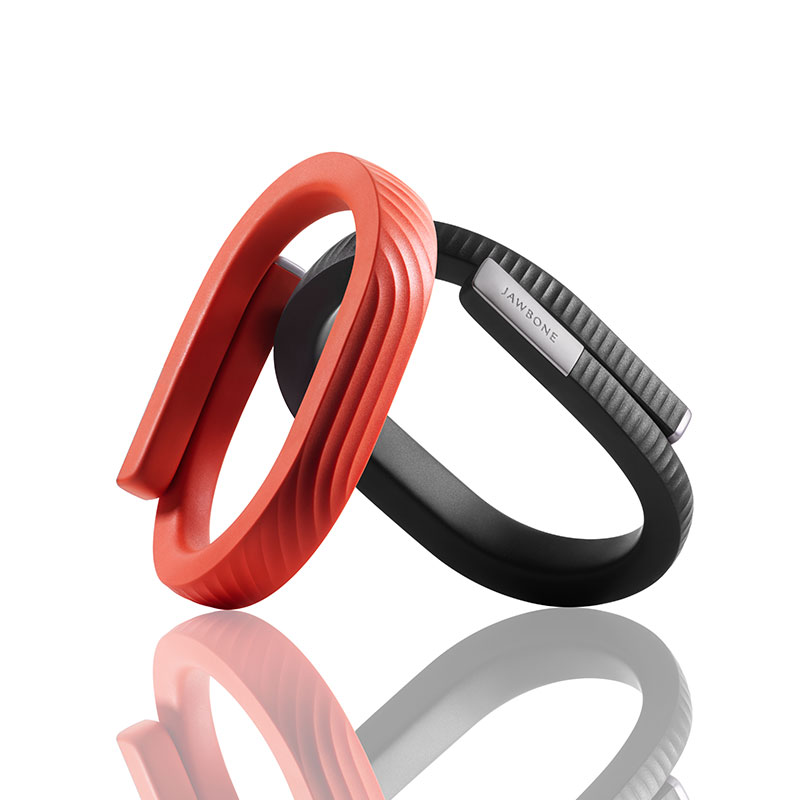 Fitbit Flex wins narrowly over the Jawbone UP in my testing of the two. The Fitbit is a little better at counting steps. In turn, the UP wristband and related app has a far better look.

Two of the most popular wrist-worn activity trackers on the market currently is Fitbits Flex and Jawbone UP. I have worn both for a month and tested especially their abilities as pedometers. Here are the results. (Actually, I also tested three more pedometers of the kind you have in your pocket and belt and three smartphone-pedometers. Those you can read about in the pedometer-test in todays edition of Danish daily Politiken, where I’m one of two experts. In this post I concentrate and dig deep into the two activity tracking wristbands). 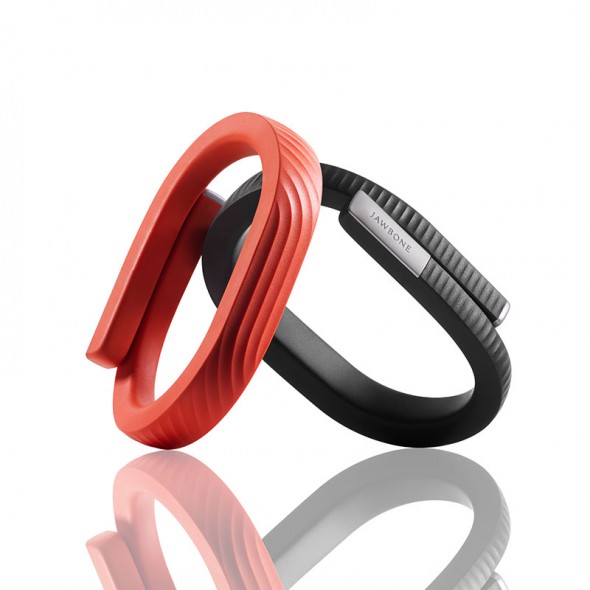 Same-same but different
The Fitbit and Jawbone wristbands are really very similar. They are both equipped with gyroscopes, which measure how much you move your hand. From here the wristbands deducts if you’re sitting still or moving around – and if you’re on the move, how many steps you’re taking and how many calories you’re likely to have burned.

Your phone is your display
The writstbands are also similar in that none of them has their own displays. Instead they rely on an accompaning smartphone-app, which allows you to dig into all the figures, graphs and tips related to the activity tracked. 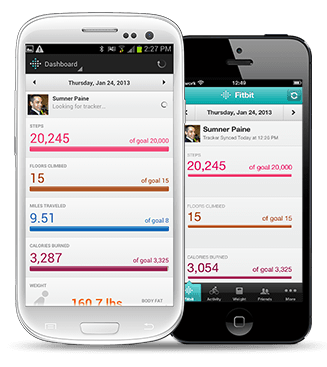 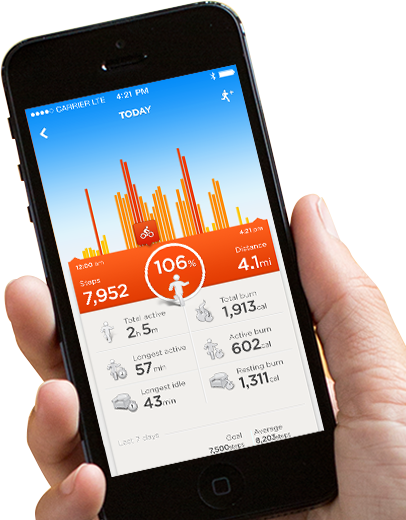 Fitbit on your mobile (left) – Jawbone UP (right)

The lack of displays don’t stop the writstbands from communicating directly with you, however. By vibrating and flashing small lights placed on the Fitbit is eg. able to tell you when you’ve reached your 10,000 steps a day goal. While the Jawbone UP can be set to remind you to move if you have been sitting still for an hour. Both work very well!

How much are they and where do I buy?
On the price side, there is not much difference either. Both trades currently for  around $99.99. On Amazon.com you can both buy the Jawbone UP

Tracking your sleep as well
At night, both wristbands can be put into night mode. Then they translate your movements into estimates of when you go to sleep and when you wake up. And of how long and how well , or at least deeply you’ve slept. 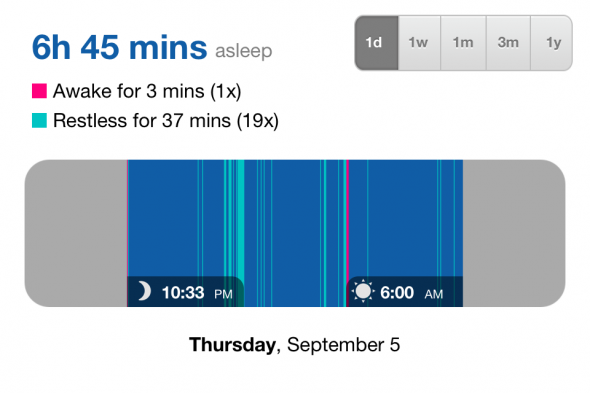 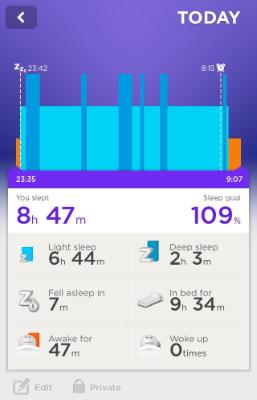 The sleep curves on the two systems. Fitbit to the left , to the right Jawbone

A fine sleep
As for the sleep-measuring both wristbands are doing reasonably well – or at least they pretty much agree in their reportings. They might not be completely in line on questions such as how many times you’ve been tossing and turning in your sleep, and might not register the exact same amount of minutes spend. But they’re pretty close. Although I haven’t systematically tested them on the sleep-measuring account, my impression is that they both track accurate enough to give me reasonable insights into my sleep habits .

More Steps
The two wristbands ability to track steps, on the other hand, I’ve tested fairly thoroughly. Each day for two weeks I led a careful record of the wristbands tracking of my steps. What was most striking about this test is that Fitbit systematically counted more steps than the Jawbone UP. Many more steps. On the day where the two disagreed the most, the Jawbone UP wanted me to have taken 8967 steps, somewhat shy of the unofficial 10,000 steps a day-goal and therefore somewhat disappointing. However on the same day the Fitbit Flex counted a total of 11,953 steps – 2986 more than the Jawbone UP and comfortably on the good side of the 10,000 steps. Expressed in relative figures, Fitbit Flex tracked 33 percent more steps than the Jawbone UP.

33 percent is a tremendously big difference. But then again this was the largest recorded disparity between the two. Other days were more modest. One day there was only 357 steps – or 3 percent – between the two. The rest of the days fell in between. When added up, the Fitbit Flex measured 18 percent more steps in average than did the Jawbone Up.

Day after day Fitbit Flex counted more steps than the Jawbone UP. Even though both wristbands were worn side by side on the very same wrist.

Consistent difference
The good thing there is to say about this striking difference is that it is consistent. It is not due to one of the wristbands measuring as the wind blows. Day after day Fitbit measures far more steps than Jawbone UP. Both are so good gauges. The question is just which of them is right!

Three times three tests
To find out which wristband most closely matches reality, I made a few simple tests: I simply counted how many steps I took and then compared this to the measurements of the wristbands. To be sure I had the test right, I conducted this test three times. And with two different types of walking (indoor and outdoor) and one type of run. So a total of nine tests per wristband (only eight for Jawbone UP, however, as one of the Jawbone UP tests failed to give usable results).

Small steps matters the most
The most stricking result of the test is that both bands have an extremely hard time figuring out how many steps are taken, when walking indoor: When I get up from my desk and go to the kitchen, then move over to the coffee machine, and from there to the sink, then to the coffee machine once more, then to the table and the bathroom etc – the wristbands find it notoriously hard to keep an accurate track record while performing these activities.

The two wristbands performed slightly better when tracking walk of 2-300 meters up down the street. And even better when I ran the same distance.

You can clearly see this on the below graph. When tracking indoor walking the two wristbands on average missed the mark by 33 percent. For outdoor walking the figure is 9 percent and for running 4 percent. The pattern is clear: the more the harder you step, the better wristbands count.

The more you trample on, the more accurate are the bracelets.

Thinking about it, it isn’t a big surprise that the wristbands have a hard time keeping up with the light stepping: The lighter the steps, the weaker the tremors travelling through the body up to the wrist and the harder for the wristband to properly pick up and process the signals.

Measures less than half the steps
Once more, however, a closer look at the data reveals that the two wristbands does not measure the same. When measuring indoor walking the disparities is particularly disturbing. Jawbone UP here records significantly less steps than Fitbit Flex. In one of my three 2-300 paces indoor tests Jawbone counted less than half of the steps I actually took . More precisely, it was a whooping 58 percent of the mark. The other two tests (outdoor walking and running) Jawbone UP missed “only” 33 and 48 percent. Fitbit was more fluttering : one time it measures 25 percent too many steps. Two other times 24 and 11 percent, respectively, too few.

Tramp and count
As for regular walking – as in “take a walk ” – and for small runs, the wristbands does a far better job. This goes in particular for Jawbone UP. In one of the three 2-300 paces ”outdoor walking”-tests performed Jawbone UP measured the exact number of steps taken. Two other times it got within one and three percent of the target, respectively, resulting in a 0.5 percent average deviation.

Fitbit Flex measured 26 percent to many steps during one test and seven and 17 percent less during the two other, respectively. Even though the variation is pretty large, it averages out, resulting in a 1.5 percent deviation from the actual result.

Jawbone is much more accurate than Fitbit when it comes to outdoor walking, though Fitbits errors tend to average themselves out over time.

Steps measured most precisely while running
When it comes to measuring 2-300 meters race the two wristbands fares even better.

In the three tests the Fitbit Flex makes one clean shot and misses the mark by +6 and -1 percent, while Jawbonens two measurements (one fell through) were respectively 1 percent below and 2 above the actual number of steps taken.

Jawbone is right on when running, while Fitbit Flex once more shows up somewhat more unprecise.

In addition to my 2-300 paces running tests I also performed one single long-distance running test. I ran around 10km and the results measured by the two wristbands here were eerily similar. A paltry eight steps divided the Jawbone and Fitbit on a trip of over 8000 steps. Which confirms “the more the tramp , the more accurate” thesis elaborated upon above.

Fitbit counts most
Summing up the three types of activity – toddling around, trotting up and running – the picture is clear. Jawbone on average records 15% fewer steps than you would actually take, provided you walked around indoor, marched outdoor and ran the same number of steps in the course of a day. Fitbit Flex similarly ended up recording one single percent shy of the actual number of steps taken.

As for the central pedometry the conclusion is therefore clear: the Fitbit Flex meters far more steps and ends up drawing a far more accurate picture of the steps actually taken than does the the Jawbone UP. This is significant enough to make the Fitbit the overall winner of my little test. This holds true even though the Fitbit as for the individual measurements are much more vague than the Jawbone UP. Because the measurements of the Fitbit – at least in this test – balances themselves out over time.

Jawbone has better looks
In return, the Jawbone UP scores a point or two more than Fitbit Flex on the look’n’feel scale – without, however, changing the overall picture. The Jawbone UP-wristband itself is just a tad more cool-looking and desinger-bracelet-like than the Fitbit Flex.

But also the Jawbone UP smartphone-app has more class. It lists your activities in a nice flow of graphs and updates where the Fitbit app to a much larger degree resembles a simple statistical data-interface. This makes the Jawbone much more of a social/life-tracker compared to the raw pedometer-functionality.

On another note: The Fitbit syncs wirelessly to your mobile where the Jawbone syncs by plugging in your wristband to your phone’s headphone jack. But in practice this didn’t make much difference to me, as it took just as long to connect and sync wirelessly as it did performing the plug-in sync. And so is the benefit of the wireless sync evaporated.

One more thing
Before you rush out to buy yourself one of the wristbands, you should know one thing: you risk a short-lived experience, no matter which wristband you buy. Both have a nasty tendency to break.

I for one am on my fourth Jawbone UP in one and a half years – and that one just broke to (every time, this one included, Jawbone has send me a free replacement. Good style – but it would be even better if the bands did not break at all!).

The Fitbit Flex I have only worn for one month, but even in that short timespan I managed to get the wristband to crack. And only two month ago, Fitbit withdrew their flagship pedometer, the Fitbit Force, from the market, as it seemed to cause allergic reactions with some users. So neither the Fitbit familiy seems completely to master their quality controls.