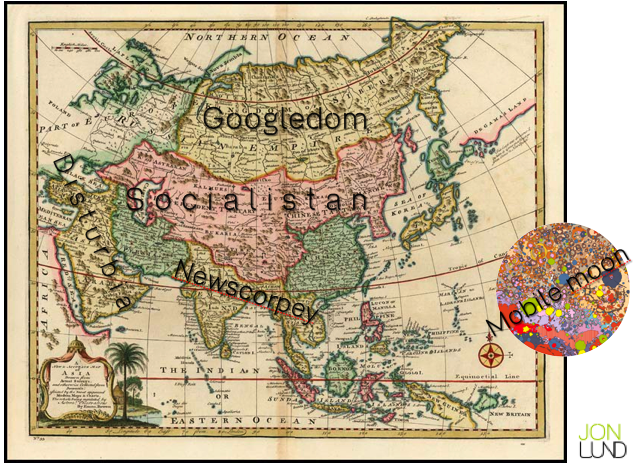 Socialistan is the largest country in the new world accounting for 31 % of total time-spend. Here by far the most Danes are actively engaged in updating their facebook-status, twitting and blogging. The women of Socialistan leads on, while men are more passive.

You won’t find a Dane who hasn’t spend time in Googledom within the past month. For 24 % of their online-time  they’re googling around, looking up numbers and facts and using the tools of the Internet.

Especially men are fond of Newscorpey. They like to stay informed (though top issues evolves around sex, gossip and crime stories). The country is ruled by the “old media” who find a hard time in the fact they’re not the key media providers anymore, accounting only for 15 % of the time Danes spend on the Internet.

In Disturbia you’re engaged in buying and selling. Danes loves this – however there’s nowhere enough online outlets to satisfy their needs: one third of all Disturbia-activity is spend second-hand shopping, consumer to consumer.

The mobile moon is orbiting around our new globe – especially powered by the iphon-ish way the internet are spreading to the pockets of Danes.

(Time spend for the four countries all are Gemius-figures for +15 years olds surfing (top 300 sites) in August 2009, which I’ve digged for you (I also analyzed them and drew up the above map). Socialistan activity is documented in Facebook rules Danish social networking, in Danish facts: Twitter is a small, elitist niche-site and in arto.com vs facebook. If you want to know more about the gender issues, check out War of the gender reborn on the internet: Women socialize, men gather information. For documentation of Newscopey-characteristics, see Economics of news: the case for qualitative journalism on the internet. Disturbia-facts and -explanations are found in Eroding powers of digitalization revealed: Secondhand-shopping, telecommunications and e-banking rules e-commerce in Denmark and Oldschool/Newschool: Top 25 Danish e-commerce sites evaluated – Consumer-trust and exploitation of business opportunities. For more on the Mobile moon check “Christmas sales at Apple App-store. Assessing the Danish market for iPhone applications”, Smart-phones leading the way: The case of iPhone and dedicated mobil-sites in Denmark and The seven faces of iPad. Assessing the potentials of Apples new tablet-device. Several other findings are available from my hand; check out the reports-section of this site)