For the first time hints of sales figures for the monthly iPad edition of Wired Magazine, which Conde Nast first launched in June, are now available. In an email interview Chris Anderson, editor-in-chief at Wired, tells me all issues – except the first – “have all sold in the multiple tens of thousands”. The first much-anticipated issue of the Wired iPad-edition, “sold nearly 110,000 copies” Chris Anderson writes to me (I briefly know Chris Anderson from a conference he and I both attended last year, resulting in this co-written post).

The cover of Wired iPad Magazine, October 2010. Sells in the multiple tens of thousands and rising

The numbers should be compared to a paid print circulation of some 750,000 issues a month; newsstand sales are in the mid-eighties. That is: the June edition outsold newsstand sales by lengths, and totalled almost 15 per cent of all sales. The print and iPad editions did cost the same at that time, later on iPad prices was lowered from $4.99 to $3.99. As the sales figures for the subsequent editions shows, most of the June sales were driven by the initial interest, which could not be sustained.

I take “sales in the multiple tens of thousands” to mean somewhere between 30,000 and 80,000, and even though it definitively is lower than the “nearly 110,000” number, it’s still pretty strong. Especially since Chris Anderson adds that “sales are now rising again as iPad penetration grows”. Reaching a 10 percent share of total circulation – 75,000 copies – at the time the iPad-edition turns one year doesn’t seem unrealistic at all, as iPad sales are still growing steeply and as the Wired staff themselves are still working on getting the iPad app right.

Speaking of getting the iPad app right, Chris Anderson also told me “we’ve got a proper social media layer coming into our app later this year”. This could be a huge thing which I’ve written up in a separate post: “Wired to roll out new social networking layer to iPad magazine this year – takes tips from social iPad-magazine Flipboard”

Also new non-Apple tablets are now starting to entering the market, based primarily on the Google Android operating system. If these in any way resembles the phones based on the same system, we can expect Android tablets to start outselling iPads very soon, creating yet more potential Wired on tablet-customers ready to be addressed by Wired. Chris Anderson does seem ready for this. I asked him “Do you believe in cross-platform iPad/Android/Chrome-tablet publishing? In a year or so we should have plenty of non-iPad tablets around!” His reply: “Yes!” 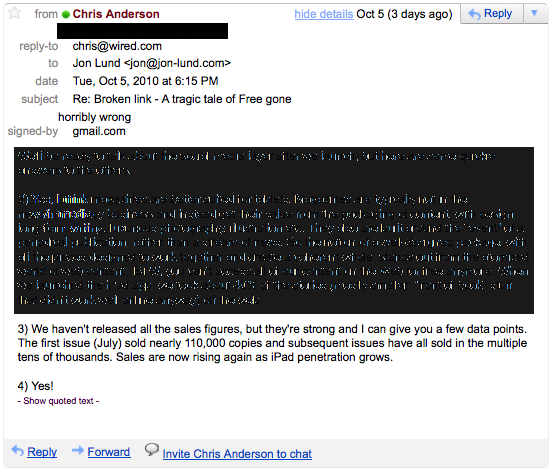 Part of the email-interview with Chris Anderson. Screenshot.

Related posts, based on the same interview:
During the email-correspondance Chris Anderson pointed to several other very interesting aspects of the Wired iPad-experience. I’ve written those up in seperate posts. Read on: