Getting an iPad-version of a printed magazine right is far more than a question of pressing a few buttons. You’ll have to work for it. A lot.
The other day I caught Chris Anderson, editor-in-chief at Wired, by mail and asked him: “How much extra does it take you in terms of editorial resources. 5, 10, 25 per cent?” He answered: “Now about +20%. Hopefully, we’ll get that down to 10-15% as our processes improve.” This, I believe, is the first time Wired has told about the actual costs of tablet-enabling their magazine (I briefly know Chris Anderson from a conference he and I both attended last year, resulting in this co-written post).

Not really one-to-one
At first sight this is a surprisingly high percentage, as Wired Magazine on iPad presents itself almost identical to the printed version. From the Magazine cover to the last page you have the feeling of reading through the same content. Paying a little closer attention, however, you start noticing the differences. The layout differs in painstaking details – print to iPad, vertical iPad to horizontal, articles are enriched with video-clips and soundbites, info-graphics sports objects spinnable in 3D and embedded navigational elements. The result is, I think, very convincing. (See below for walk-through of 4+ ways the Ipad edition differs from print).

It’s creating this “well-designed package” that takes them so long at Wired. Putting their craftmanship into not only re-packaging their print-product, but doing this in a way that “works together” and create a cohent whole” on the iPad-platform as well.

Decent trade-off
As I’ve described in another post Wired sells “in the multiple of tens of thousands iPad copies a month“. A figure which is rising as iPad-penetration grows, says Chris Anderson. Compared to a total paid circulation of some 750.000 copies a month, one could very well expect iPad editions to account for 10 percent of total sales by summer 2011 (at a price of $3,99 compared to the printeditions $4,99) growing futher as new tablet devices starts getting hold of the market. Reaching 15 percent by 2012 doesn’t seem farfetched either. Which would be a decent tradeoff for a 15 per cent increase in editorial cost, I’d say.

FOUR WAYS THE IPAD-EDITION OF WIRED DIFFERS FROM PRINT

How they differ 1: Find five errors
While the covers of the print- and iPad-versions look the same, five small adjustments have been made in the iPad-version. 1. Only two of the three stories hinted to at the top are the same. 2. And the typography differs. 3. The text at the car is pushed slightly down and to the right on the page. 4. The arrow pointing to Elon Musk has disappeared. And 5. the “batteries included – oct. 2010” is moved from the bottom right to left. 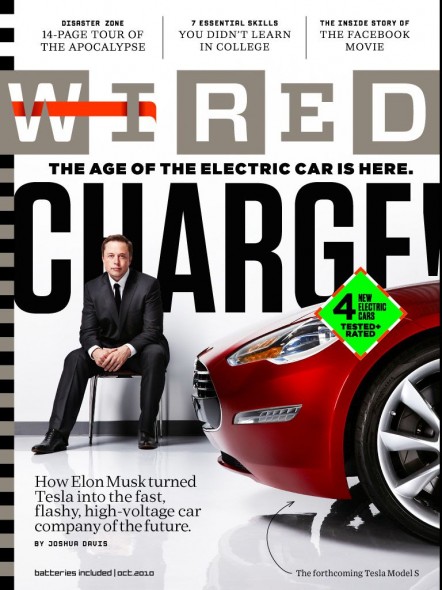 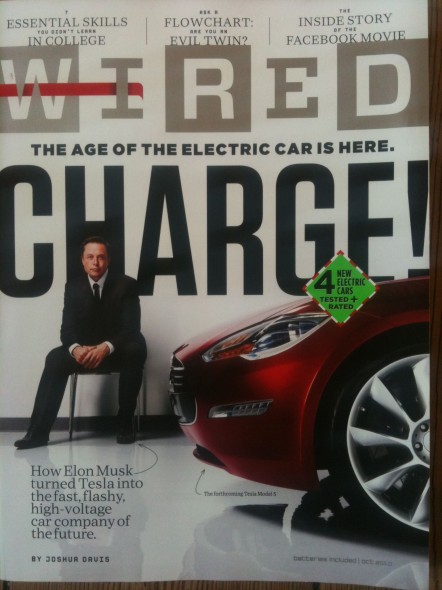 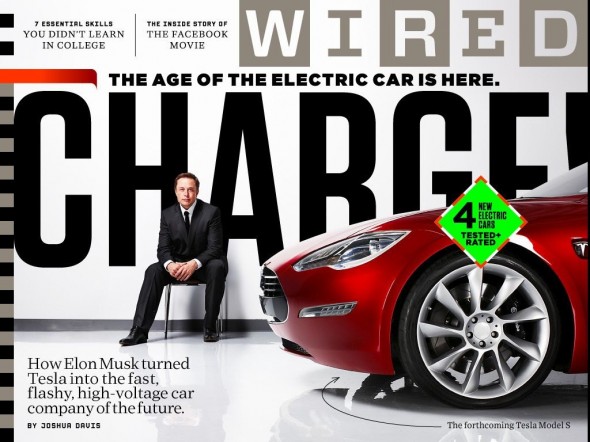 It looks like a piece of cake. But actually it means redesigning the entire magazine not once nor twice but thrice. And this goes for  all of the more than 150 pages in the magazine.

How they differ 2: Movie-clips and sound-bites
Producing the iPad-edition isn’t just a question of the lay-out of the elements, however. It’s also about enriching the content with digital material, where it makes sense. In the iPad-version”The Great Zombie Bubble”-article, eg., features 2:33 minutes of embedded video-clips from “The Walking Dead” and “Dead Set”, while the “Mad Max Is a Fraud”-rant is being read aloud in its entity by the author. 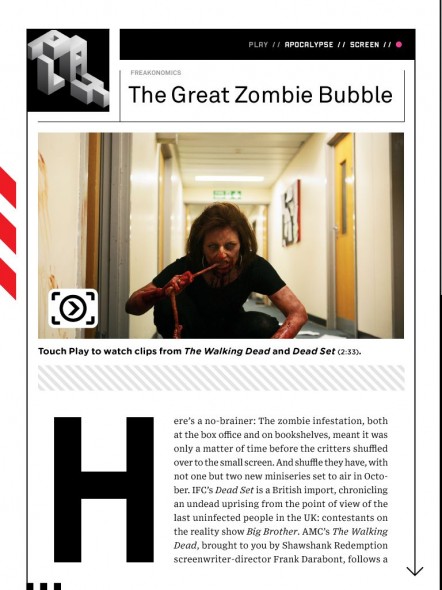 How they differ 3: Illustrations and infographics

Some of the illustrations in the iPad-edition of Wired are just there, plain and square like the ones in the printed magazine. Others are pinch- and zoom-able like the gorgeous photo accompanying the “Crude Awakening”-article. Yet others are represented in 3D, making it possible for you to spin the object around, having a look at it from all angles. Have a look at these two versions of the “Perfect Pitch”-article. The print-version shows the movements involved in drawing. The iPad-version plays the full movement when touched. 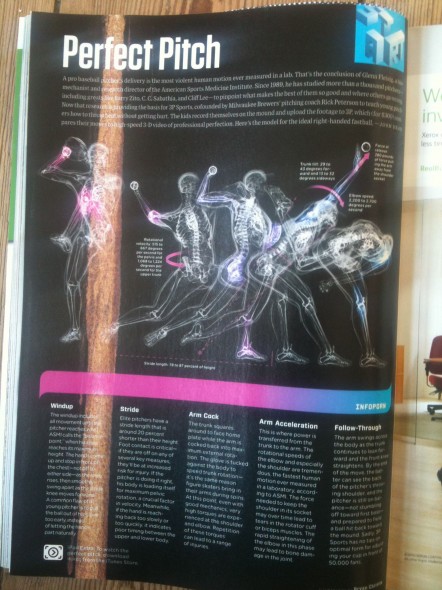 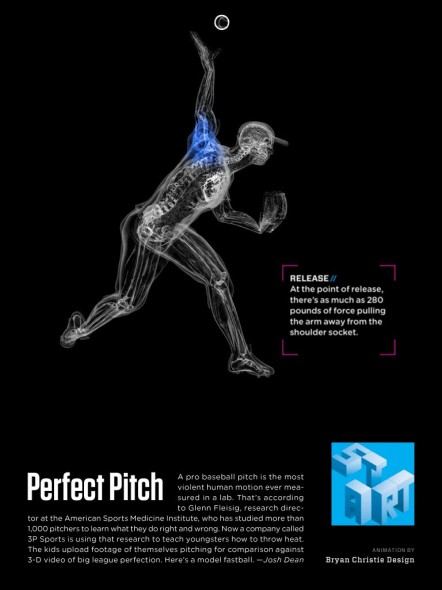 Not only does it take ressources to make the interactive 3D-version of the Perfect Pitch. It also takes an editorial multi-platform focus thinking out the two versions in the first place.

In order to make info-graphics work, Wired has adopted an extensive use of illustrations with embedded numbers, corresponding to each their explanatory text. In the printed versions this is a well-developed technique. And it shows out to work really well in the iPad-edition as well. On the iPad the technique makes it possible to compress several print-pages into one screen, keeping the illustration fixed on the screen, while the text-boxes are displayed individually as the numbers are pressed.

How they differ 4+
And then, off course, the whole experience of holding a printed, glossy, magazine in your hands is different from holding a sleek device of glass and steel. First and foremost the navigational structure is very different: the full body of the printed magazine is there, right in front of you – you can actually feel the amount of information; it has weight and physicality. You can feel the paper as your fingers flip through the pages. It’s kind of  like dancing – sometimes perhaps struggling or even fighting – with a corpus of information and sensory inputs.
This is not true for magazines on tablets. Tablet magazines doesn’t reveal what amount of information is stored away underneath it’s good looking cover. It’s a very much more abstract the magazine. To adjust for this, Wired magazine embarks several different navigational techniques, like this one, allowing you to skim through the entire magazine. 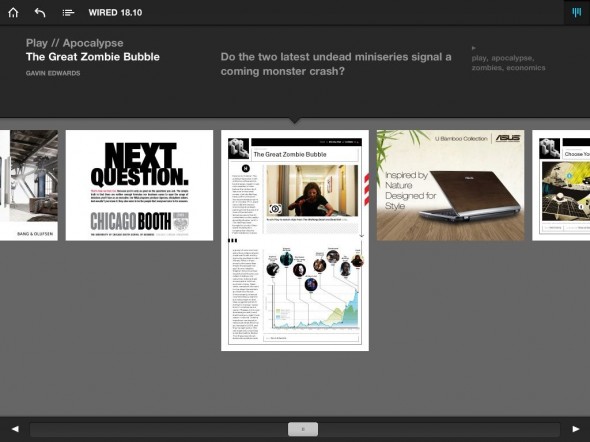 Related posts, based on the same interview:

During the email-correspondance Chris Anderson pointed to several other very interesting aspects of the Wired iPad-experience. I’ve written those up in seperate posts. Read on: