I had a hunch from international stats – now it’s for sure: iPhone-owners really do use their phones extended capabilities. Neither talk, texting or music does it in itself. You’ll have to add barcode-readers, geo-contexual weather forcast, GPS, gaming and similar apps (programs that runs on  smartphones) to get the full picture of what iPhones are really used for by their owners.

These are at least the implications of my latest report, which surveys the use of Apples Danish app-store in December 2009, and finds that more than 2,2 million apps downloaded during the Christmas-month (For more detail se below: “Christmas sales at Apple App-store. Accessing the Danish market for iPhone applications”). 2 million downloads in a country with a total population on some 5,5 million people and with something like 200.000 iphones in circulation. That’s a huge number.

No cash-cow – yet
In the report I also find total December app-sales revenues to reach some 3 million dkk (€ 400.000) – estimated 200.000 paid apps at an average price of 15 dkk (€ 2). 60 percent heroff is left to the guys who’ve made the apps, when Apple and the Danish VAT has taken their shares. That’s not really enough to make anybody rich. Not even though it represents a growth of some 150 percent since last Christmas, according to the report. I actually doubt anyone would be able to make a decent business selling apps in Denmark – at least not if the confine themselves to the less than 6 million Danish-speaking worldwide audience. (Go English and it’s quite another story – the “Outside”  weather-app of Danish Robocats might actually make some money. Sales are bound to be good given the excelent reviews it has received)

The real potential is in free apps
By far the largest number of downloaded apps – more than 2 million in itself, actually – I found to be free. In the report I particularly look into stats given to me by Danish Broadcasting corporation, DR on their radio-programme app “P3“. 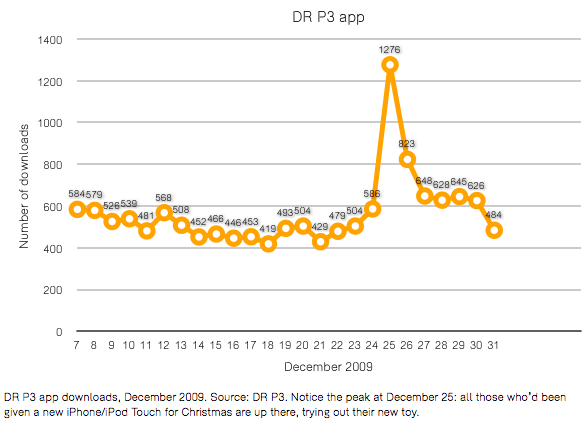 In the first two month after release, it was downloaded 60.000 times – close to 1/3 of all iphone-owners have actively engaged themselves in installing and using the app! This to me shows were to find the true benefit of apps: if you do it right, apps really have the potentials of bringing you very close to your customers. Actually right in their pockets. And allthough iPhone penetration still has a long way to go, it has reached enough – actively interested – people to give it a go.

“Christmas sales at Apple App-store. Accessing the Danish market for iPhone applications” is in 15 pages and includes 4 graphs and 3 illustrations.

To order the report, send an email to jon@jon-lund.com including your contact information with subject: “Buy Jon Lunds December app-store report”, and you’ll receice both report as pdf-file and an invoice.