Hopes are high that the iPad – Apples new tablet computer – will open up a new life for online magazines when it starts shipping in early April. With good reason, my latest report shows. Danish experience with “traditional” online “flip-pages” e-papers,  indicates a massive appeal of the printed-edition-metaphor in online publishing. In January 2010 15% of all adult Danes visited at least one e-paper, up 26% from same period 2008. 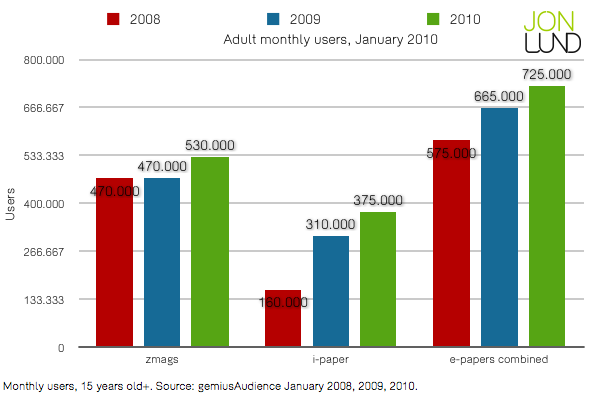 The report (“Waiting for the iPad: the track record of Danish e-paper solutions” – find reference below) shows the time spend at Danish e-papers to have doubled from 5 to more than 10 minutes per user during the past two years. Also the study shows users of e-papers flips a lot of pages during a visit – actually e-paper readers turn 3 times the number of pages of ordinary web-site users. However they don’t spend more time, simply browsing quickly through the e-paper. The study builds on data from the two largest e-paper solution providers, zmags and i-paper, powering a host of online weekly ad circulars and e-magazines.

Originally I myself was quite hesitant embracing the e-paper concept, which seemed strangely archaic in it’s attempt to restore “good old days” publishing, imposing limits to yourself which did not make sense in an online world. Lately, however, I’ve come to recognize the value of the book (or printed newspaper) as a browsing medium: it holds the promise of selection and quality, of covering all relevant aspects of a subject, of bringing you the satisfaction of getting to know what is worth to know in a limited time. Also the advent of videos and rich media content during the past years have enriched the epaper, actually allowing for image galleries, embedded videos, overlay text presentation, search, integration of social media elements, comments, integration to facebook and twitter and the web at large.

In the report I predict some low-cost projects and a few show-off prestige projects to emerge during 2010, but find major take-off unlikely to occur before at the earliest 2012-2013. The reason is, that iPad publication faces a number of barriers, which will need to be addressed. One is off course the number of iPads on the market. In a previous report I estimated first year sales to reach 20.000 units in Denmark, growing steeply to some 200.000 sold in 2013. Also the revenue-split model laid forth by Apple, claiming 30 percent for themselves poses an obstacle, like the lack of support of Flash in the iPad meaning most established e-paper (which are Flash-based) will need to be re-programmed. Finally most of the e-papers surveyed in the report are relatively simple e-papers, basically being static images without much interaction apart from flipping pages and zooming in and out. A more full-blown e-paper concept will increase the cost – and production time – of producing e-papers: Story-lines, content, text, images and videos will have to be created, the complexity of lay-outing the e-paper will increase and – if social elements are added to the e-paper – the dialogue at the e-paper will have to be monitored and nursed.

“Waiting for the iPad: the track record of Danish e-paper solutions”. 14 pages, 3 illustrations.

To order the report, send an email to jon@jon-lund.com including your contact information with subject: “Buy Jon Lunds Epaper succes”, and you’ll receive both the report as pdf-file and an invoice.