Half a year after opening up it’s online operations, the website of Danish retailer Superbest comes in ten of ten in reach compared to the websites of other Danish retailers, even though Superbest is the only of the competitors to offer full-blown online grocery shopping. This is among the findings in my latest report. I say: lower the prices (convenience alone won’t do it), start building trust through social networking activities and make the services known through advertising. 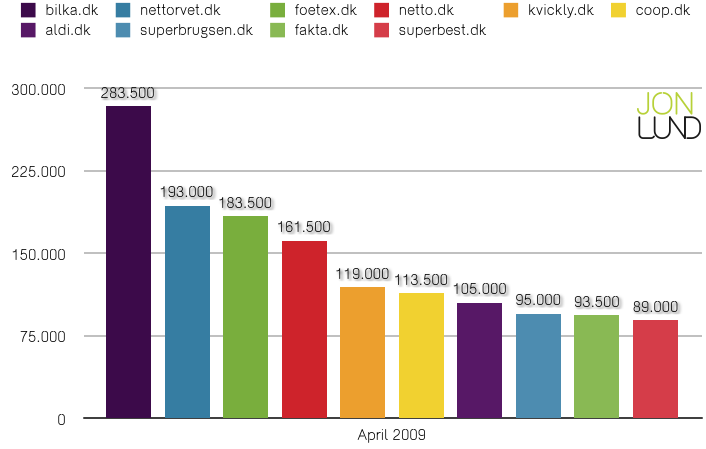 Ten of ten is really not impressing
Superbest.dk reached 90.000 adult danes during april 2010. That’s not a high number. In total 795.500 Danes visited at least one of the top ten Danish grocery store websites. Superbest.dk in this way only had a grab at 11,6 percent of all visitors. A number which is spot on the Superbest market share in the “real” world measured in terms of total sales (11,5 percent in 2009). Only none of the competing websites offered more than at most sales of non-food items from their websites. By that token superbest.dk should have performed better.

Also the visitors to the superbest-website was found only to visit the site some 1,4 times in average during April 2010. A score which once more puts superbest-dk near the bottom of top-ten list. If users really had embraced the online grocery shopping concept, they’d have visited the site several times a week.

Convenience won’t do
The reason why superbest.dk isn’t doing any better is, I think, threefold. First, the declared value proposition of superbest.dk is to make things easier – not cheaper – for the consumer: do the grocery shopping in the night or during the day-time, whenever it suits you best, at work or at home. Manage your own time – and be willing to pay for it: the regular offers from the physical outlets don’t apply online.

Looking at the data, however, there’s nothing to suggest the actual users of superbest.dk feels this way. Those most in need of time – families with two or more kids – are underrepresented at superbest.dk with 13.000 visitors in total in April while those with plenty of time – the singles – are overrepresented, featuring some 25.500 adults living by themselves.

Convenience, it seems, won’t do the trick alone. However much Danes want to save time, they also want to save money! While they might be willing to pay to have the goods delivered to their doorsteps, they don’t like the goods themselves to be overpriced.

Confidence is needed
Several surveys have shown confidence – broadly speaking – to be one of the main obstacles to e-commerce. People want to be sure they get what they’ve ordered, delivered at the right time to the right price with no hidden fees. And online, consumers are always have this nagging fear, that something in the online store, it’s payment or delivery processes may be broken in some way. Or, worse, that someone in the process is deliberately trying to hustle you.

This is particularly true about Superbest, who fights a distrust legacy. In September 2009 – just prior to the launching of the online store – it was revealed how seven Superbest-stores had re-packaged, re-labelled and sold old meat, causing a public scandal and forcing Superbest to fire those responsible for the handling of meat. As a consequence consumer trust in supermarkets dropped, and Superbest suffered a severe loss of credibility.

Online, however, nothing is done to address concerns like these. The online grocery store looks fine and professional – and actually works just as you’d expect. But the dialogue is missing. The ability of the site to let consumers raise concerns and ask questions – and to let Superbest answer those question, sorting out misunderstandings or -perceptions whenever they occur – are non-existing. Customer testimonials are non-existing. Likewise, there is no integration to external consumer-sites, who could endorse – or criticize! – the workings of Superbest.dk. No official Facebook group. No Twitter-profile.

Customers are consequently left without any way to find out whether Superbest.dk is or is not worthy of being entrusted with their shopping list.

Tell us about it!
One final factor contributing to explaining the Superbest.dk-lack of success is – advertising. Superbest simply hasn’t been running any ad-campaigns telling customers to get online. And it goes without saying, that as long Superbest themselves tries to keep their online store a secret, nothing much happens.

As mentioned, Superbest may have had other corporate communication priorities for the past half year than to ensure maximum launch of superbest.dk. Namely trying to minimize the consequences of the “old meat scandal”. This also could explain the lack of social networking: when threatened on it’s life, many corporations seek as much control over the situation as possible. Even though a proper use of social media might actually have helped Superbest regain consumer-trust at large.

When (and if) things settle down, Superbest might have a second shot at the online retailing market. When the meat scandals are forgotten they might find a way to go forth and meet the market and the consumers face to face. Embracing criticism, comments and dialogue, and shouting out loud that Denmark has now a first-class online shoppping store.

To order the report, send an email to jon@jon-lund.com including your contact information with subject: “Buy Superbest-report”, and you’ll receive both the report as pdf-file and an invoice.