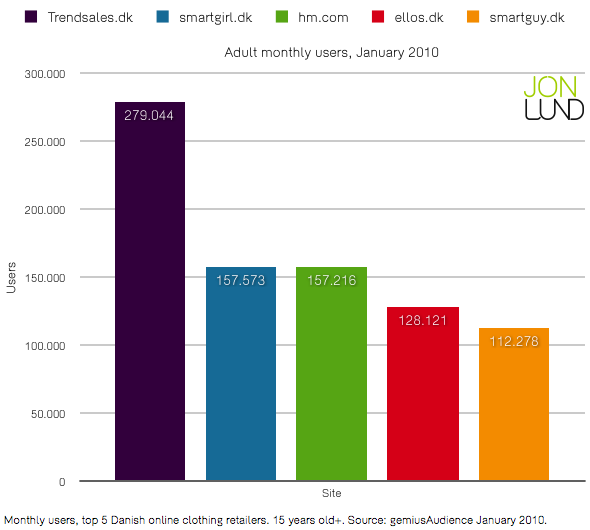 This is one of the main in “The Emperor’s clothes: The true top of Danish clothing online retailers″ – my latest report, published today. Find reference below.

What’s interesting as well is how brand-sites are missing from the list. Both smartgirl.dk, smartguy.dk and ellos.dk seems to be established as retailers, while the online stores of eg. fashion brands Inwear, Tiger of Sweden and Only doesn’t appear on the list at all. Perhaps there are actually sustainable ways to deal with channel conflicts. It could seem so.

Also, the category seems rather stable. Comparing the January 2010 numbers to the January 2009 numbers reveals the category as a whole hasn’t grown. As clothing is among the leading sectors in online retail, it seems we’re witnessing a mature market, where the online retailers have actually been able to meet the demand of the customers. That actually huge!

Another interesting – though perhaps not to surprising – finding is how age and sex are the two clearly defining demographics of online clothes shoppers. Young segments are really into this whole clothing/fashion thing – while the elder are not. Women likewise has a MUCH better take on shopping clothes online than does men.

To order the report, send an email to jon@jon-lund.com including your contact information with subject: “Buy Jon Lunds Clothing online retailers”, and you’ll receive both the report as pdf-file and an invoice.