I’ve owned my ARdrone since Monday. Here are my first impressions. For those of you who don’t have a clue what ARdrone is, it’s a helicopter – or rather “Quatro-copter” since it has four rotor-blades – which you control with your iPad, iPhone or iPod Touch. It has two video-cameras, one in it’s nose and one in it’s belly, streaming live to you, so you can see where you fly, even if the drone (as unmanned flying vehicles are called) is not in sight. But actually flying is not what ARdrone is about. It’s about gaming. Load a game to the drone, and virtual enemies, who will try to shoot you down if you don’t shoot them first, will be appear on your i-device-display.

Here I am with my ARdrone: 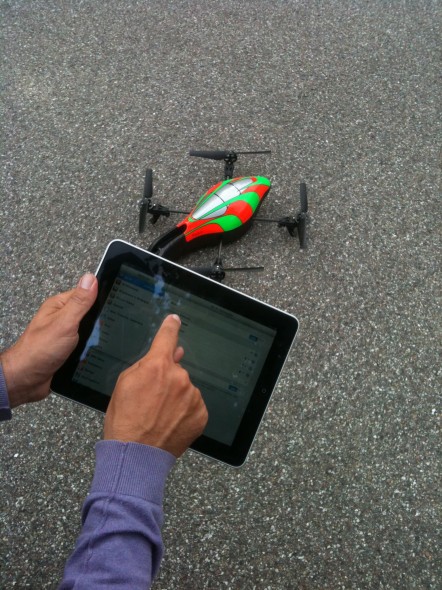 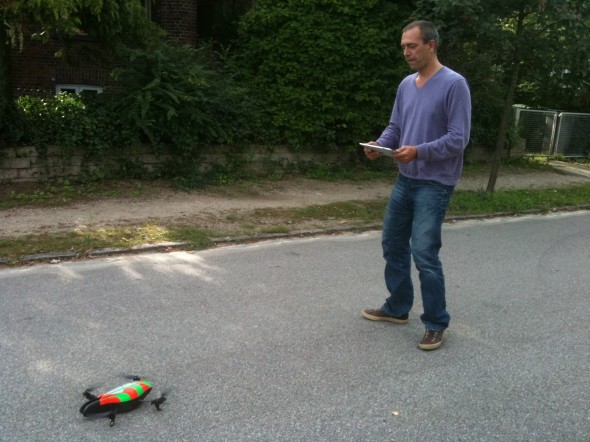 Hard to fly
As you can tell from the picture, it takes a great deal of concentration to fly the drone. Especially outside – it’s very sensitive to wind, so you wanna be very careful. It easily drifts away, threatening to collide with by-standing trees, cars, hedges or what you have.

Indoors there’s no wind, and you can actually fly it. It’s doable – but not comfortable. At least not if you, like me, don’t have a free indoor space with a diameter of eight meters. The free operating range at my house is more like one meter, at the best.

4-5 crashes
I’ve crashed four or five times by now with no visible signs of damage to the ARdrone. But I suspect that’s more luck than anything else. The ARdrone itself seems very fragile! Made out of lightweight polystyrene, with it’s propellers and landing gear exposed to all and any bypassing obstacles. So be careful – this is not a toy you want to throw into the arms of your 8-years old son (though he’ll beg you to do so).

No gameplaying yet
This far, flying the drone is great fun! I don’t know, however, if this will still be the case in a week or two from now. By then I’ll (hopefully) have learned to control the drone. And by that time, I’ll also be familiar with the game-playing part of the ARdrone experience – a part of the pleasure I’ve not yet been acquainted to. This far it’s all been about how to control the plane in a decent way.

The drone cameras work perfectly, however. Here I am, controlling the flying drone with my iPad, as seen form the front-facing camera of the drone. This image, is the one on my screen as well: 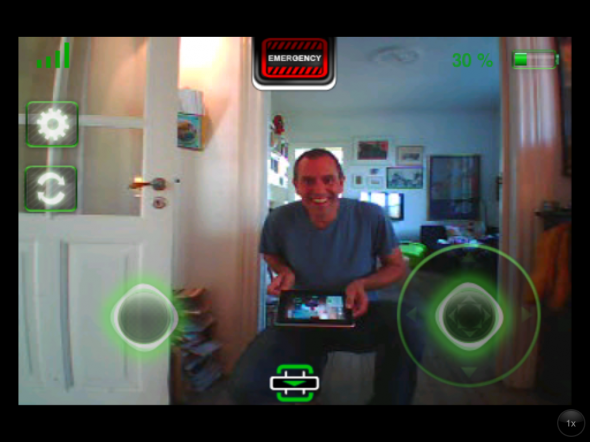 Poor battery
The battery is one of the ARdrones greatest weaknesses. It only lasts 10-15 minutes – then you’ll have to re-charge it for some one-and-a-half-hour to fly again. The minute you want more than just test-drive the drone, this will be a serious problem. Better buy a spare battery right away.

Easy assembly
Assembling the drone was quite easy. It comes neatly in a box, all you’ll have to do is to put together 2-3 different parts. Then your’re done. Connecting the drone to the iPad-controlling device was quite stratight-forward as well. (Though I haven’t managed to connect my iPhone to the drone yet – but I haven’t tried very hard either).

Built-in wi-fi
The ARdrone is connected to the controlling iPad/iPhone/iPad through it’s own built-in wi-fi. That is: you do not depend on a wi-fi being available at the spot you want to fly. You can take the drone to the woods, and fly it there. As long as you, the pilot, are within a distance of some 50 meters, it should work out. Within that range, your controllling device will simply pick up the ARdornes sigenal.

This is it for now, folks. Stay tuned for more info.