Few people would be surprised to hear that surfing the web from the iPad is great. Or that it’s perfect for magazines. Or movies on the move. But what about typing longer pieces of text. Using the 10-inch screen and a virtual keyboard? I myself had my doubts.

After having written my first articles in regular laptop-mode, onboard a plane, in waiting halls and on the train and home in the sofa, the conclusion is clear: the iPad sets new standards for writing “out of office”.

And I know what I’m talking about. I’ve written lots of documents sitting in my sofa with the laptop in my – lap. I’ve thought it OK, never really contemplating on what the writing process felt like. I do now.

What Apple has figured out, is that laptop writing is really very different from desktop writing. At the desktop I do ten-finger writing. My hands are by default placed on the home keys: asdf and jkl. I use a lot of keyboard short-cuts: I alt-c to copy, alt-v to paste, alt-f to find – and then I alt-s a lot to save the document I’m working on. And then off course I let my fingers slide over the trackpad to control the cursor.

These habits have followed me to the couch. I’ve been sitting with the laptop in my lap, desperately trying to force my fingers to my default finger position, awkwardly glitching over the trackpad and twisting my shoulders to hit the alt-whatever-keys at regular intervals. And it’s not until now I’ve realized the amounts of stress I’ve put myself through.

The Wii of word-processing
The key-difference between iPad writing and laptop-writing is this: When writing on an iPad the device in your lap is your friend – not an enemy. The only 800 grams-tablet begs you to not only touch and swipe it’s screen, but also to turn the device, tabbing new buttons, constantly switching the position of your body. Because that’s what you want to do, when you’re in the sofa – change position every once in a while. Cross your legs, uncrossed them again. Drag your feet up – pit them down. Shift the weight, while looking at the TV-set to catch a few minutes of a program that suddenly draws your attention. Get up to pour yourself some coffee. 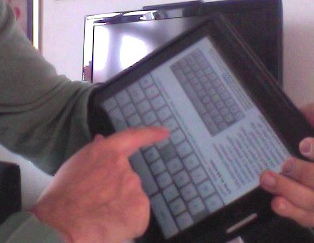 This is what the iPad not only lets you, but encourages you to do. While laptops resists your every attempt to move you body in natural ways. With their 2 kilograms+, their screens, inflexibly fixed to the keyboard, and their desktop-based interface laptops inherently fixates you and forces you into evermore uncomfortable positions.

In this way the iPad is the Wii of word-processing. It lets you write with your body.

The keyboard works
The virtual keyboard featured on the iPad first surfaced on Apples iPhone. Typing on relatively small display of a smartphone is clearly a challenge, especially since you can’t feel the keys, the slight resistance of the “a”, “b” or “c” when hit, and conversely: the assurance from mistyping by accidental strokes. 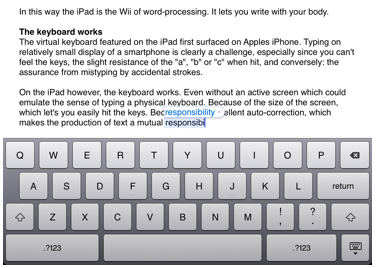 On the iPad however, the keyboard works. Even without an active screen which could emulate the sense of typing a physical keyboard. Because of the size of the screen, which let’s you easily hit the keys. Because of the excellent auto-correction, which makes the production of text a mutual responsibility between your fingers, the keyboard and the iPad itself. And because correcting spelling and mistyping simply doesn’t distress you on the iPad to the same extend, compared to desktop writing. It blends in as a natural part of the dynamic iPad body-writing experience.

It’s all on the screen
There’s – obviously – no mouse on the iPad. And no trackpad either. Marking a place in the text, scrolling, activating menus (of which there are only the utmost necessary) – all is done by tabbing, pitching and touching the screen. In effect hereof the difference between the keyboard, which is also onscreen, and the mouse evaporates. The screen is all there is. And it’s very active.

There are no “alt” or “ctr”-keys either. If you want to select a part of your text you tab a word and drag an area until the portion of text you want to mark is covered. Tabbing the selection then let’s you copy or cut it. Turning the screen in upright position brings you layout menus for making the selected text bold – or eg have it centered.

Inserting pictures is the same: tab the image-button, choose your images – and it goes right on screen complete with lines helping you placing it nice in the text flow. Tab the image once and you can pitch a corner and drag it to resize – or simply move the image around the screen. Place your finger on it and copy-and-delete buttons appear. Tab twice, and you zoom the picture so display only a part of it. And so on.

Maintaining a sufficient overview
Small screens suffer from being small. You simply tend to loose the overview when writing longer pieces. this off course even more so, when close to half the screen is occupied by a keyboard. 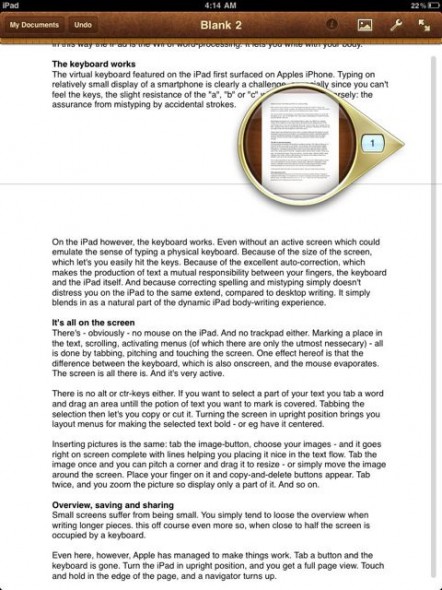 Even here, however, Apple has managed to make things work. Tab a button and the keyboard is gone. Turn the iPad in upright position, and you get a full page view. Touch and hold in the edge of the page, and a navigator turns up.

Another curious thing about the iPad is how you save your documents: you don’t! Or rather: the iPad remembers your document by itself. At anytime you can exit your document – eg to look something up on the Internet. You return by opening Pages and voilà – here’s the document exactly as you left it.

Even if you switch off the iPad completely you’ll find your document as you left it when returning back in. Side by side with the other docs you’ve created.

Sharing sucks
This auto-saving on the iPad doesn’t help you much, however, when you want to continue your work at your desk-top computer. And this you want to do. However perfect the sofa-writing experience is on the iPad, you still want a regular computer when you sit at your desk. The more so because the iPad wont let you print in itself. You’ll have to have your document transferred to another computer in order to do so.

And this is where the chain breaks for Apple. Getting your document out of the iPad is done in either by mailing it or by uploading to the internet. And it simply doesn’t work well enough. First, it takes to much time and it’s a cumbersome process. Second, it doesn’t produce you one centrally stored file on which you work. Which is a pain, when you want to edit the same document from both your iPad and your desk-based computer. You’ve really got to do some work on that, Apple!

Passes with flying colors
Apart from this sharing-glitch, the iPad experience is wonderful. The iPad represents a transformative take on computing from the top of your lap, introducing a new paradigm for casual computing, which could fundamentally change the entire laptop-industry. Testing the word-processing capabilities of the iPad is tough. It passes with flying colors.

UPDATE, October 19, 2010
After having spend half a year with my iPad I have a confession: I don’t use it for writing anymore. Whenever I have to write more than a short email or twitter-update, I intuitively look for my laptop. Perhaps it’s due to the lack of a Danish keyboard (making typing the three special Danish letters æ, ø and å somewhat clumpsy, having to hold down the a or o key respectively, waiting for æ, ø and å to pop up). Perhaps it’s due to the lack of a Danish spell-check (which you really need, because you invariably makes typing mistakes). However I don’t think I’ll change my habits when the Danish keyboard and spellcheck arrives next month. Why: because I type MUCH faster on a regular keyboard. And because my writing process typically involves switching back and forth between different applications, looking this up on the web, checking that on wikipedia, looking into a old email-correspondance and so on. And the iPad isn’t suited for this purpose. Also, the difficulties in sharing documents between my laptop and iPad – as noted above – also is a pain.

So I guess I’ll have to back down a little on my celebration on the iPads transfomative effects to casual computing. It’s still a great machine. But not really for writing longer pieces.